Life after a death sentence 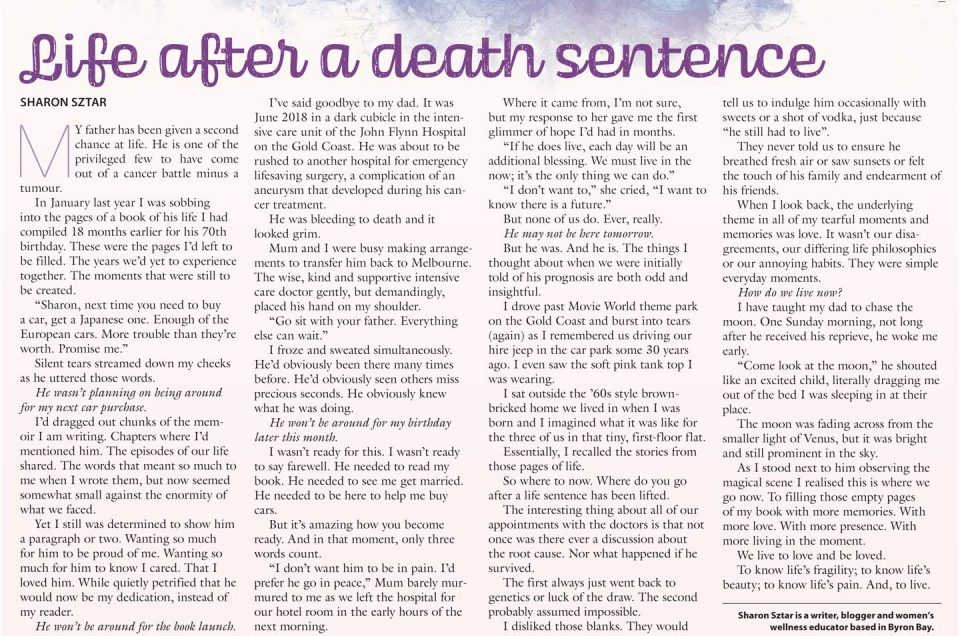 My father has been given a second chance at life. He is one of the privileged few to have come out of a cancer battle minus a tumour.

In January last year I was sobbing into the pages of a book of his life I had compiled 18 months earlier for his 70th birthday. These were the pages I’d left to be filled. The years we’d yet to experience together. The moments that were still to be created.

“Sharon, next time you need to buy a car, get a Japanese one. Enough of the European cars. More trouble than they’re worth. Promise me.”
Silent tears streamed down my cheeks as he uttered those words.

He wasn’t planning on being around for my next car purchase.

I’d dragged out chunks of the memoir I am writing. Chapters where I’d mentioned him. The episodes of our life shared. The words that meant so much to me when I wrote them, but now seemed somewhat small against the enormity of what we faced.

He won’t be around for the book launch.

I’ve said goodbye to my dad. It was June 2018 in a dark cubicle in the intensive care unit of the John Flynn Hospital on the Gold Coast. He was about to be rushed to another hospital for emergency lifesaving surgery, a complication of an aneurysm that developed during his cancer treatment.

He was bleeding to death and it looked grim.

Mum and I were busy making arrangements to transfer him back to Melbourne. The wise, kind and supportive intensive care doctor gently, but demandingly, placed his hand on my shoulder.

“Go sit with your father. Everything else can wait.”

He won’t be around for my birthday later this month.

But it’s amazing how you become ready. And in that moment, only three words count.

“I don’t want him to be in pain. I’d prefer he go in peace,” Mum barely murmured to me as we left the hospital for our hotel room in the early hours of the next morning.

Where it came from, I’m not sure, but my response to her gave me the first glimmer of hope I’d had in months.

“If he does live, each day will be an additional blessing. We must live in the now; it’s the only thing we can do.”

But none of us do. Ever, really.

He may not be here tomorrow.

But he was. And he is. The things I thought about when we were initially told of his prognosis are both odd and insightful.

I drove past Movie World theme park on the Gold Coast and burst into tears (again) as I remembered us driving our hire jeep in the car park some 30 years ago. I even saw the soft pink tank top I was wearing.

I sat outside the ’60s style brown-bricked home we lived in when I was born and I imagined what it was like for the three of us in that tiny, first-floor flat.

Essentially, I recalled the stories from those pages of life.

So where to now. Where do you go after a life sentence has been lifted.

The interesting thing about all of our appointments with the doctors is that not once was there ever a discussion about the root cause. Nor what happened if he survived.

The first always just went back to genetics or luck of the draw. The second probably assumed impossible.

I dislike those blanks. They would tell us to indulge him occasionally with sweets or a shot of vodka, just because “he still had to live”.

They never told us to ensure he breathed fresh air or saw sunsets or felt the touch of his family and endearment of his friends.

When I look back, the underlying theme in all of my tearful moments and memories was love. It wasn’t our disagreements, our differing life philosophies or our annoying habits. They were simple everyday moments.

How do we live now?

I have taught my dad to chase the moon. One Sunday morning, not long after he received his reprieve, he woke me early.

“Come look at the moon,” he shouted like an excited child, literally dragging me out of the bed I was sleeping in at their place.

The moon was fading across from the smaller light of Venus, but it was bright and still prominent in the sky.

As I stood next to him observing the magical scene I realised this is where we go now. To filling those empty pages
of my book with more memories. With more love. With more presence. With more living in the moment.

We live to love and be loved.

Sharon Sztar is a writer, blogger and women’s wellness educator based in Byron Bay

Life after a death sentence